Sleestack, also known as “Sleestak” to many members of the cannabis community, is a sativa dominant hybrid (70% sativa/30% indica) strain that is a potent cross between the rare Shrom X Martian Mean Green strains. This dank bud was created by breeders at the infamous DNA Genetics farms and boasts a THC level ranging from 15-17% on average. Sleestack was named after the famously hilarious aliens in the 1970s TV series, Land of the Lost. Users describe the Sleestack high as a primarily cerebral high that leaves you sociable and uplifted. This bud has a slowly rising onset of a clear-headed energetic high that can have psychedelic tendencies if too much is consumed at one time. Due to these effects, Sleestack is ideal for treating patients suffering from MS, migraines, inflammation, and chronic pain due to injury or illness. Sleestack has a sweet citrusy pine aroma and a taste of pine with a sour lemon aftertaste. The Sleestack buds have thick dense minty green popcorn-shaped nugs that have a spattering of thin rich amber and fiery orange hairs. These nugs are incredibly leafy and have a fine layer of milky white trichomes and sticky sweet resin.
https://www.youtube.com/watch?v=t6na-uCIJoQ

Be the first to review “Sleestack Marijuana Strain” Cancel reply 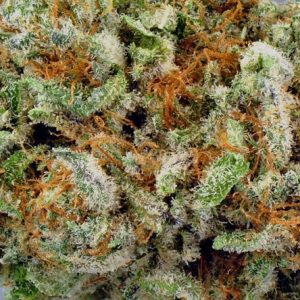