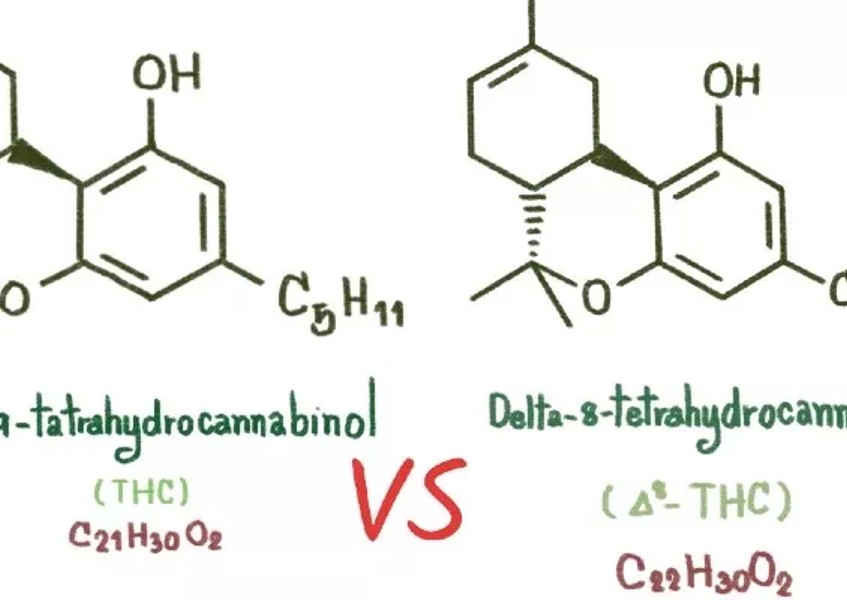 Delta 8 edibles have flooded the market. Marketers promote them with an enthusiasm approaching false advertising. They target would-be customers in states where they have yet to legalize the growing, sale, possession, and use of Delta 9 cannabis.

What is the Delta 9?

Delta 9 serves as an abbreviation for Δ9-tetrahydrocannabinol or Δ9-THC. The following diagram illustrates the Δ9-THC molecule C21H30O2 with the RED circle emphasizing the difference between Delta 9 and Delta 8.)

Research work directed by Raphael Mechoulam at the Weizmann Institute in Israel isolated Tetrahydrocannabinol in 1964, an important step leading to later developments in effective pharmacology. A lipid, Delta 9 has low solubility in water but emulsifies in organic oils.

While researchers believe THC served to protect cannabis plants from pests and herbivores with a shock to their respective systems, Dr. Mechoulam saw the potential for medical benefits. He showed how the cannabis plant’s cannabinoids mapped over to the human Endocannabinoid System (ECS), the brain and body’s most extensive system weaving throughout other systems, including the respiratory, neurological, pituitary, veinous, and different pathways.

Most importantly, to cannabis researchers and users, Delta 9 THC triggers the psychoactive response behind cannabis’ formal and informal reputation. Its mechanism of action works as an agonist binding with CB1 cannabinoid neuroreceptors in the central nervous system. It does the same with the immune system’s CB2 receptors. As it binds to the receptors, it modulates their activity, exciting or calming their function. It restores their proper transmission or agitates neurotransmitters to excite the brain.

Depending on many individual and contextual situations, this chemical influence can prove mind-altering and therapeutic. If it excites or agitates the brain’s hypothalamus, it leads to a psychoactive “trip.” This cannabis “trip” made cannabis a “Schedule I” element under the Controlled Substances Act, where it still sits with cocaine, heroin, and LSD. On the other hand, that same neuro-agitation may correct depression, PTSD-related syndromes, and scores of other psychological and physical ailments caused by imbalanced or dysfunctional neurotransmission.

To be precise, Δ9-THC begins as THCA in the trichomes of the cannabis plant. The THCA (tetrahydrocannabinolic acid) has its own values, but it becomes THC through a process of decarboxylation caused by heat and light. The process can occur naturally, but burning cannabis in a joint, pipe, or bong releases the THC and its powers to the brain and body through the bloodstream.

Delta 8 is the marketing key to Δ8-tetrahydrocannabinol or Δ8-THC. The following diagram illustrates the Δ8-THC molecule.

The Delta 8 molecule is so like the Delta 9 that it should produce similar if milder euphoric psychoactive experiences. This Delta 8 isomer of Delta 9 differing only with a double bond between its carbon atoms shown here inside the RED circle.

Manufacturers and purveyors promote this similarity as if Delta 8 were a slightly less powerful and risky alternative to cannabis THC. They can make this claim for two reasons.

However, both the FDA and individual states have raised concerns about what Delta 8 is and is not. The lack of substantiated scientific research and the enthusiasm of the claims makes them wonder what is legitimate and what is not.

You should not expect a Delta 8 trip comparable to one launched by a Delta 9 strain. The multiple claims of therapeutic value lack formidable research. While the Farm Act of 2014 liberated the use of hemp-derived by-products, it has also licensed exaggerated and deceptive claims.

So, when it comes to Delta 8 edibles, oils, or more, it is “Buyer Beware.” For example, my personal experience with 25mg gummies did help me sleep; however, I do not have trouble sleeping. I wake with dry eyes and throat, so there is evidence it works like cannabis.

Of more concern, I discovered that if I consumed the gummy in the evening, I found myself depressed. The Delta 8 prompted no euphoria or elevated mood. In my case, it did the opposite. Other users from my small survey reported some reduction in pain accompanied by depression.

A more extensive test sample may find Delta 8 edibles empower medical therapies comparable to Delta 9, but I am not confident it deserves the marketing claims that power its increased popularity.